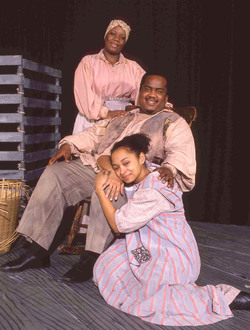 Cast members of Theatreworks USA's production of "Freedom Train" rehearse a scene from the children's musical, which the SFA Children's Performing Arts Series will present at 9:30 a.m. and 12:30 p.m. Tuesday, May 11, in W.M. Turner Auditorium on the SFA campus. Photo by Jean-Marie Guyaux.

NACOGDOCHES, TEXAS - Seats are still available for Theatreworks USA's production of "Freedom Train," which the Stephen F. Austin State University College of Fine Arts will present at 9:30 a.m. and 12:30 p.m. Tuesday, May 11, in W.M. Turner Auditorium as part of its Children's Performing Arts Series.

"This inspirational musical about Harriet Tubman and the Underground Railroad incorporates dance, dialogue and period music to tell the story of self-sacrifice, dedication and survival," said Diane J. Flynn, director of the children's series. "Laced with warmth and a sense of humor, it celebrates the human spirit."

Theatreworks USA is America's largest non-profit theatre for young and family audiences. Since its founding in 1961, the company has presented its shows to over 72 million people in 49 states and Canada. Currently, it tours approximately 16 shows to an annual audience of four million.

"We are delighted to once again bring a quality production by Theatreworks USA to the young people of East Texas," Flynn said. "This is the same group who presented 'Nate the Great' earlier this season."