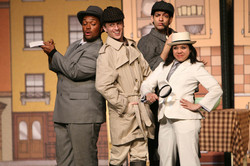 Cast members of Theatreworks USA's production of "Nate the Great" rehearse a scene from the children's musical,which the SFA Children's Performing Arts Series will present at 9:30 a.m. and 12:30 p.m. Wednesday, Jan. 27, in W.M. Turner Auditorium on the SFA campus. Photo by Joan Marcus.

NACOGDOCHES, TEXAS - Seats are still available for Theatreworks USA's production of "Nate the Great," which the Stephen F. Austin State University College of Fine Arts will present at 9:30 a.m. and 12:30 p.m. Wednesday, Jan. 27, in W.M. Turner Auditorium as part of its Children's Performing Arts Series.

The new hour-long musical is based on the first volume of Marjorie Weinman Sharmat's book series about boy detective Nate the Great.

"Kindergarteners through fourth graders will enjoy seeing the beloved characters come to life as Nate uses all his derring-do to locate his friend Annie's missing painting," said Diane Flynn, director of the children's series. "And adults will appreciate the emphasis on teamwork and friendship."

Thatreworks USA is America's largest non-profit theatre for young and family audiences. Since its founding in 1961, the company has presented its shows to over 72 million people in 49 states and Canada. Currently, it tours approximately 16 shows to an annual audience of four million.

"We are delighted to once again bring a quality production by Theatreworks USA to the young people of East Texas," Flynn said. "This is the same group who presented 'If You Give a Pig a Pancake,' ' The Midnight Ride of Paul Revere' and 'Winnie the Pooh' in previous seasons."