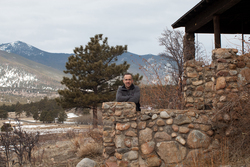 Stephen Lias, SFA professor of composition, stands near the cabin in Rocky Mountain National Park where he will stay during his two-week artist-in-residence July 18 through 31.

As many visitors to the park do, Lias will take in the sights and sounds of the Bear Lake area, marvel at the majesty found along Trail Ridge Road, and appreciate the mental solitude and physical exertion inherent in a hike up Long's Peak.

And as most do, Lias will record his two-week stay with photographs. However, his documentation will go beyond the use of the digital camera, for after each daily exploration, Lias will also spend time capturing the experiences in music as fulfillment of the Artist-in Residence Program for which he was selected.

A self-described adventurer-composer, Lias is looking forward to this opportunity to combine his love for the outdoors with his passion for composing by creating a trumpet sonata that captures the majesty and spirit of the park.

The sonata will then become a part of his multi-year project to complete a sizeable body of work in preparation for the centennial celebration of the National Park Service in 2016.

Lias has already written works inspired by Big Bend National Park, Sequoia, and Kings Canyon. "River Runner," a three-movement sonata for trombone and piano, was inspired by a kayaking trip through Big Bend's Santa Elena Canyon. SFA music faculty Deb Scott (trombone) and Ron Petti (piano) performed it earlier this year at the Big 12 Trombone Conference in Lubbock and at the Texas Conference of the National Association of Composers, USA.

Scott and seven members of the SFA Trombone Choir premiered the four-minute "Sequoia" at the International Trombone Festival in Austin July 7. "Kings Canyon," a six-minute fanfare for 12 trumpets was premiered July 10 at the 35th Annual International Trumpet Guild Conference in Sydney, Australia.

While at Rocky Mountain National Park from July 18 through 31, Lias will make two public presentations about the work he's doing. He plans on discussing with the audience the concept of how experience, emotions and ideas become music.

"I'll share my experiences and pictures from the other parks and then play snippets of those pieces. I may even work with the audience to get ideas for the Rocky Mountain piece, asking them to describe what they've seen, heard or felt."

Lias hopes to have the trumpet sonata from Rocky Mountain completed in time for a spring performance in Nacogdoches, just in time to provide inspiration for the audience to plan their summer excursions.

"What we get when we go to a national park is a kind of universally recognized recharge," Lias said. "If I can catch just a whiff of that in my music, that will rekindle people to go out and be adventurous."