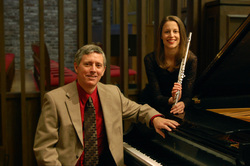 Titled "Stolen Moments: Transcriptions for Flute and Piano," the recital will feature works that originally were written for piano or violin and piano.

The first half of the program includes the second movement of Samuel Barber's "Canzone," "Hungarian Peasant Suite" by Bela Bartok and Erik Satie's "Gymnopedies."

After the intermission, Guenther and Parr will perform Cesar Franck's "Sonata in A Major," a standard in the violin repertoire.

Guenther, who joined the SFA faculty in 2005, has appeared as soloist, chamber and orchestral musician throughout the United States, as well as in Central and South America. She performs actively in the greater East Texas area and has played with the Marshall, Longview, Shreveport and Tallahassee Symphony Orchestras.

She has performed at numerous festivals and has served as a high school flute clinician in Florida and Texas. She is a member of the Gemini Flute Duo with Jennifer Keeney, with whom she will present Creative Flutist Master Classes this summer in Austin and Houston.

Parr began studying piano at the age of 5. He furthered his education at Kent State University, at the Hochschule für Musik and Darstellende Kunst in Vienna as a Fulbright Scholar, and at Yale University, where he earned his master's and doctoral degrees.