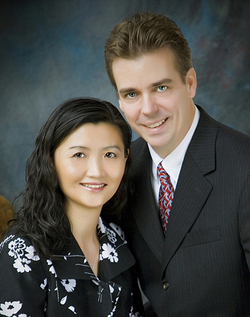 NACOGDOCHES, TEXAS - The Stephen F. Austin State University College of Fine Arts and School of Music will present Drs. James Pitts and Ping-Ting Lan in a recital of duo and solo piano works at 4 p.m. Sunday, Dec. 5, in Cole Concert Hall on the SFA campus.

Pitts and Lan are both employed by the SFA School of Music--Pitts as a staff accompanist and adjunct keyboard faculty, and Lan as a piano teacher for the Music Preparatory Division.

The married couple will jointly present two pieces by Maurice Ravel: the "Feria" movement of "Rhapsodie Espagnole," performed on one piano; and "La Valse (The Waltz)," in the composer's own arrangement for two pianos.

Pitts described the latter work as a "brilliant piece that contains a great variety of moods and builds to an enormous climactic ending."

"Our solo portion of the recital will include several highly virtuosic and colorful etudes by Claude Debussy and György Ligeti," Pitts continued.

Two large Romantic works are also included on the program.

"Ping-Ting will perform the searching and powerful 'Vallée d'Obermann' by Franz Liszt, and I will play the evocative, cyclic 'Fairy Tale Sonata' by Russian composer Nicholas Medtner," Pitts said.

As collaborative pianist at SFA, he performs in faculty, guest artist and student recitals, competitions, auditions and master classes. He is also the pianist for the SFA Opera and organist at Westminster Presbyterian Church in Nacogdoches. Pitts earned his Bachelor of Music from Baylor University and his master's and doctoral degrees in piano performance from the University of North Texas.

Lan, who received her master's and doctoral degrees in piano performance from the University of North Texas, has given numerous solo recitals and chamber concerts in the United States and her native Taiwan.

Lan maintains a large class of students of all ages through SFA's Music Preparatory Division. Her students have won numerous awards in regional and state piano competitions.