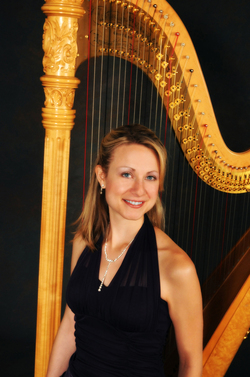 Harpist Sarah Oliver will present two different programs at the Nacogdoches Public Library on June 21 and 22.

NACOGDOCHES, TEXAS - Most East Texans know what a harp is and can probably identify the sound it makes, but they probably have questions about how the person playing the harp knows which strings to play or what techniques the musician uses. Harpist Sarah Oliver will answer these questions and more during two separate programs at the Nacogdoches Public Library June 21 and 22.

All ages are invited to the 6 p.m. program on Monday, June 21, when Oliver will explain the instrument and perform G.F. Handel's "Concerto in B-flat," Harold Arlen's "Over the Rainbow" and Carlos Salzedo's "Tango" and "Seguidilla."

Oliver, who will begin teaching harp at SFA in the fall, will also discuss the harp program at SFA as well as opportunities for area children to receive harp lessons through SFA's Music Preparatory Division.

At 10 a.m. on Tuesday, June 22, Oliver will present a program about the harp for young children. The audience will be invited to sing along to Oliver's performances of "Twinkle, Twinkle, Little Star," "The Itsy Bitsy Spider," and "If You're Happy and You Know It."

Nine-year-old Sarah Hall, who is a student in SFA's Music Preparatory Division and daughter of Lufkin residents Darcy and Donna Hall, will perform Arlen's "Over the Rainbow" and Joseph Haydn's "Allegro."

Oliver will close the program with two Disney songs, "When You Wish upon a Star" and the theme from "Beauty and the Beast."

As an active soloist and chamber musician, Oliver has performed in concert halls, churches, museums and private clubs throughout the metropolitan Detroit, Cleveland and Central Savannah River areas.

During the 2004 and 2005 Christmas seasons, she completed tours of John Rutter's "Dancing Day" with the Ohio Boychoir, and in 2005, she earned first place in the Midwest Harp Festival Solo Competition and was a prizewinner in the American Harp Society National Competition.

Visit Olivers's website, www.saraholiverharp.com, for more details about her. For more information about SFA's Music Preparatory Division, call the director, Pat Barnett, at (936) 468-1291.