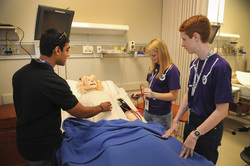 Participants in the recent SFA/JAMP Camp toured the simulation laboratory at SFA's new DeWitt School of Nursing. Pictured (from left) are Saad Chaudhry of Nacogdoches, Caitlin Vann of Coldspring and Cody Welch of College Station.

Twenty-six high school seniors recently got a taste of what it's like to be pre-med students during a week-long immersive camp hosted by Stephen F. Austin State University.

The camp, now in its second year, was created for college-bound students planning to pursue a career in the medical field and was funded by a grant from the Joint Admission Medical Program. Participants in SFA/JAMP Camp attended college-level science and math classes, toured medical facilities, participated in leadership and service activities, and shadowed medical professionals.

Dr. Kevin Langford, camp director, said the week is structured to mirror as closely as possible the lifestyle of pre-med students, who must successfully juggle rigorous coursework with other responsibilities that are crucial for successful entrance into medical school.

"We really try to emphasize to them that the pre-med lifestyle basically amounts to having five full-time jobs," said Langford, associate professor of biology and pre-professional program director at SFA.

"Not only do they need to be successful academically - every grade they make impacts their ability to get into medical school - but at the same time they must be preparing for the Medical College Admission Test, gaining professional experience through job shadowing, taking part in leadership activities and serving their communities in some meaningful way. We expose them to all of that at this camp."

SFA professors volunteered their time to teach 50-minute lectures in biology, chemistry and mathematics each day of the camp. The campers spent mornings shadowing local physicians, dentists and ophthalmologists to gain a better understanding of medical professionals' day-to-day responsibilities.

The students also traveled to Houston to tour Hermann Hospital and the University of Texas Health Science Center and visited the state-of-the-art simulation laboratory at SFA's new DeWitt School of Nursing.

As an example of the service work required of pre-med students, groups volunteered their time at three Nacogdoches locations where Habitat For Humanity is helping construct homes for families in need.

"The camp has done a really good job of opening our eyes to what college is really going to be like," said Caitlin Vann, a camper from Coldspring who is planning to become a pediatrician or pediatric nurse. "All of the speakers have been so informative and encouraging. I'm really glad I came."
Camper Saad Chaudhry of Nacogdoches said the highlight of his week at camp was watching a local physician perform a surgical procedure.

"I already knew I wanted to be in the medical profession before I came, but one of the reasons I applied was I wanted to do the job shadowing and see what kind of doctor I want to be," Chaudhry said. "Now I know I want to be a surgeon."

The SFA/JAMP camp was the first of its kind when it was started during the summer of 2009 with the goal of introducing more young people to the challenges and rewards of a medical education. Since then, the program has been replicated at several other university campuses across the state.

"These students are really getting a head start on all their future college classmates because when they get to college they are not going to be shell-shocked at the amount of material coming at them and the other responsibilities they will have," he said. "After this week, they will know exactly what they are signing up for."