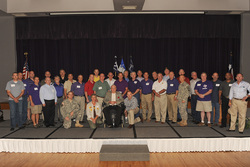 The reunion included a breakfast reception at the Military Science Building followed by a buffet lunch and awards presentation in the Baker Pattillo Student Center. Later, attendees were honored during the Lumberjack football game against the University of Central Arkansas.

James R. "Jimmy" Britton of Dallas and Edwin W. "Ed" Hander of Columbia, Mo., the first two officers to graduate from the program in 1968, received special recognition during the reunion. Retired Lt. Gen. Orren R. "Cotton" Whiddon of Lufkin, a 1955 SFA graduate, also was recognized as the most senior military officer to have graduated from SFA and for his longtime support of SFA and its ROTC program.

The university received word from many invited officers who were not able to attend the reunion because they are currently serving across the country and around the world. Among them was Maj. Laural Levine, a 1994 SFA graduate now stationed at Camp Eggers in Afghanistan.

Along with her regrets, Levine sent an American flag that was flown in honor of SFA at the International Security Assistance Force Headquarters in Kabul, Afghanistan, on Sept. 2. The flag was presented to SFA President Baker Pattillo by Lt. Col. Todd Reichert, military science professor, during the Board of Regents meeting Monday.