SFA to open 'The Global Artistry of Leo and Diane Dillon' 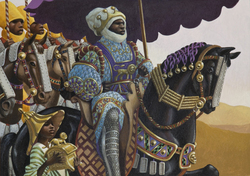 "King on Horse" from the book "Mansa Musa" is one of 75 illustrations that is included in "The Global Artistry of Leo and Diane Dillon" that the SFA School of Art will open at 6 p.m. Friday, Feb. 12, in the Cole Art Center @ The Old Opera House, 329 E. Main St. in downtown Nacogdoches.

NACOGDOCHES, TEXAS - Art work by a highly-acclaimed husband and wife team of children's book illustrators is featured in "The Global Artistry of Leo and Diane Dillon," which the Stephen F. Austin State University School of Art will open at 6 p.m. Friday, Feb. 12, in The Cole Art Center @ The Old Opera House.

The exhibition focuses on the global nature of the Dillons' work, which ranges from African and Native American folktales to Asian and Scandinavian epics, from fantasy to science fiction. The major theme of their illustrations is that all people, whatever their culture or race, have universal experiences, explained Christian Cutler, director of SFA galleries.

The artists met while attending Parsons School of Design in New York City. They graduated from Parsons in 1956, and eventually married in March 1957. During over 40 years of marriage, they have illustrated almost 60 books, two of which were published last year.

In addition to two back-to-back Caldecott Medals (for "Why Mosquitoes Buzz in People's Ears" in 1976 and "Ashanti to Zulu" in 1977), the Dillons have received five New York Times Best Illustrated Book Awards and two Coretta Scott King Awards (for "Rap a Tap Tap: Here's Bojangles--Think of That" in 2003 and "The People Could Fly" in 2005).

The Society of Illustrators honored the Dillons with the Hamilton King Award in 1971 and the Gold Medal in 1992 for "Northern Lullaby" and inducted them into its Hall of Fame in 1997.

"This is a great exhibition for children and young artists, but viewers of all ages will appreciate the 75 plus original works on paper," Cutler said. "The Dillons' use of color and attention to detail in their illustrations bring their characters to life. "

Peter Andrew, SFA professor of art, will speak during the exhibition's opening about the importance of Leo and Diane Dillon to the field of children's literature.

This exhibit was organized by the National Center for Children's Illustrated Literature, Abilene, Texas. It is a joint presentation of the SFA College of Fine Arts and School of Art and is sponsored in part by the SFA Friends of the Visual Arts and Nacogdoches Junior Forum.

The exhibition is displayed in the downstairs Ledbetter Gallery of The Cole Art Center, 329 E. Main St. in downtown Nacogdoches.