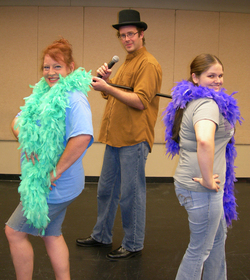 SFA theatre students rehearse a scene from the upcoming production of "Side by Side by Sondheim," which will open the School of Theatre's summer season on Friday, June 24. Pictured, from left, are Nacogdoches senior Kathryn Knight, Houston junior Justin Hughes and League City senior Rebecca Mersinger.

NACOGDOCHES, TEXAS - The music of Broadway composer/lyricist Stephen Sondheim is the center of "Side by Side by Sondheim," which the Stephen F. Austin State University School of Theatre will open at 7:30 p.m. Friday, June 25, in W.M. Turner Auditorium.

The musical revue is one of two shows included in the SFA summer theatre season that runs through Saturday, July 17. Throughout the three-week period, SFA theatre students will rotate productions of "Side by Side by Sondheim" with Constance Congdon's "Beauty and the Beast."

"Side by Side by Sondheim" premiered on Broadway in 1977 and received a Tony Award nomination for Best Musical. It includes songs from Sondheim's early shows such as "A Funny Thing Happened on the Way to the Forum," "Company," "Follies" and "A Little Night Music," and classics from "West Side Story," "Gypsy" and "Do I Hear a Whistle," which Sondheim wrote in collaboration with acclaimed composers Leonard Bernstein, Jule Styne and Richard Rodgers, to name a few.

The show's narrator, played by Dallas senior Margaret Lewis, ties the revue together with explanations of and stories about the 31 songs included in the show. The script contains some adult language.

"The show will dispel any assumption that all songs from musicals are happy and campy," said Lewis. "Sondheim's songs are quite diverse. Yes, some are happy, but there are also those that are sad, those that are smart and witty, and those that are inspiring."

Tickets for "Side by Side by Sondheim" are $12 for adults and $6 for seniors and students. Tickets for "Beauty and the Beast" are $6 for individuals or $5 each for groups of 20 or more.