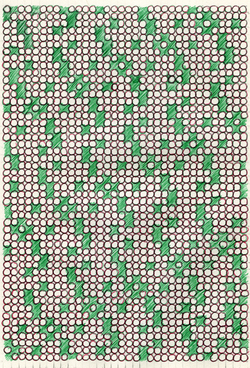 NACOGDOCHES, TEXAS - The Stephen F. Austin State University College of Fine Arts and School of Art will open "Neal Cox: Grids and Panoramas" at 6 p.m. Friday, Aug. 20, in the Reavley Gallery of The Cole Art Center @ The Old Opera House.

The exhibition features recent works by Neal Cox, SFA assistant professor of art, and is the artist's first solo show in Nacogdoches. The opening includes a 6:30 p.m. gallery talk by Cox.

The third type deals more with a survey of the passage of time, or a sequence of events, explained Cox. "This panorama is a time elapse video pieced together from thousands of frames captured from a low-resolution webcam focused on the slopes of a nearby mountain."

The grids included in the show are all composites of various series of objects, arranged in a grid-like pattern. Some are a series of watercolors, others are eight linocuts printed on paper, and the third type is a series of digitally printed photographic composites.

Cox has been a member of the SFA faculty since 2007. The native of Provo, Utah, received his Bachelor of Fine Arts in printmaking from Brigham Young University. He earned his Master of Fine Arts in printmaking from the University of Texas at San Antonio, where he later taught and served as the master printer for the UTSA Collaborative Editions program.

"Neal Cox: Grids and Panoramas," which will run through Saturday, Oct. 2, is sponsored in part by Nacogdoches Junior Forum and SFA Friends of the Visual Arts.