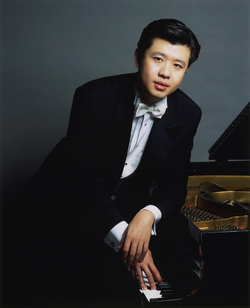 Guest pianist Ning An will perform Sergei Rachmaninoff's Second Piano Concerto during the Orchestra of the Pines' concert at 7:30 p.m. Saturday, Oct. 2, in Cole Concert Hall.

NACOGDOCHES, TEXAS - Guest pianist Ning An will perform Sergei Rachmaninoff's Second Piano Concerto during the season-opening concert of the Stephen F. Austin State University's Orchestra of the Pines at 7:30 p.m. Saturday, Oct. 2, in Cole Concert Hall on the SFA campus.

The orchestra will also perform two other Russian works--the Overture to "Ruslan and Ludmilla" by Mikhael Glinka and "Lt. Kije Suite" by Sergei Prokofiev.

"I've titled the concert 'Fantastic Heroes' because both of the orchestral works portray characters with heroic efforts in a widely vivid and imaginative storyline," said Gene H. Moon, SFA director of orchestral studies and the orchestra's music director. "These and Ning An's performance of the Rachmaninoff will provide for a very exciting opening concert."

The New York Concert Review hailed An as a musician who "combines a flawless technique and mastery of the instrument with an expressive power that is fueled by profound and insightful understanding."

His top prizes from the Queen Elizabeth, Cleveland and William Kapell Piano Competitions led to performances in Carnegie's Weill Recital Hall, Salle Verdi (Milan), and the Great Hall of the People in Beijing, China.

The concert is a joint presentation of the SFA College of Fine Arts, School of Music and Orchestra Series. It is sponsored in part by Nacogdoches Memorial Hospital and the Wedgeworth-Wright Endowment for the Arts.