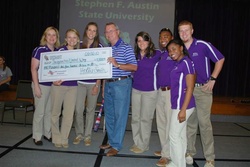 "The idea was to involve the orientation team in service learning activities, which is a key focus for SFA students' learning outside the classroom," said Hollie Smith, director of orientation.

The gifts are a precursor to the October kickoff of the Nacogdoches County United Way's "Live United" campaign, through which the organization hopes to raise $300,000 to benefit local agencies that help those in need in the areas of health, education and finances.

Amanda Horne, assistant director for student affairs programs and SFA representative for United Way, hopes the SFA community's contribution will meet $20,000 of the goal through student programs such as orientation, homecoming activities and SFA faculty and staff involvement.

"I was amazed and grateful for the contributions collected through orientation this summer," Gary Lee Ashcraft, executive director of Nacogdoches County United Way, said.