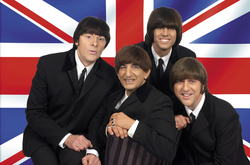 Composed of four musicians and actors who were hand-picked by Louise Harrison-sister of the late George Harrison-Liverpool Legends performs songs spanning the entire career of The Beatles and on through the solo years.

"With precise attention to every musical detail, along with costume changes, vintage instruments and special effects, the group will make you feel like you're watching the real thing!" said John W. Goodall, associate dean of the SFA College of Fine Arts.

The musicians/actors have toured the world, playing in historic venues such as Carnegie Hall, The Cavern Club in Liverpool, recording at the famed Abbey Road Studios in London and performing with Denny Laine (co-founder of Wings with Paul McCartney), Pete Best (the original Beatles drummer) and the Boston Pops.

They appeared on The Travel Channel's "Beatlemania Britain" and headlined "International Beatles Week" in Liverpool where 100,000 Beatles fans jammed Victoria Street to hear them in concert.

Prior to the Nacogdoches performance, Dr. Richard Berry, SFA provost and professor of music, will give an informative talk on the Beatles' music at 7 p.m. in Griffith Gallery, located across the hall from Turner Auditorium in the Griffith Fine Arts Building, 2222 Alumni Dr.