SFA to present 'Amahl and the Night Visitors' 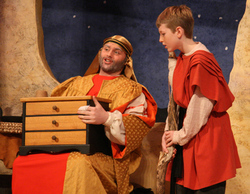 The opera, written in English, tells the story of Amahl, a poor, crippled shepherd boy, and his mother who are visited by the Three Kings during their journey to the Christ Child. Since it was first produced for television in 1951, the opera has become a Christmas classic that is produced in communities throughout the United States.

Cameron LaGraff, seventh grader at Central Heights Middle School, will sing the role of Amahl. SFA vocal students make up the rest of the cast.

Juniors Leslie Laney of Gilmer and Briana Selman of Nacogdoches will alternate in the role of Mother. The three kings will be portrayed by McKinney junior Joshua Dennis, Jacksonville sophomore Stephen Hanna and Pearland sophomore Adam Charles Williams. Tyler Van Patten, Spring junior, will sing the part of the page.

"We are offering two daytime performances to accommodate school groups who might want to see the production," said Dr. Deborah Dalton, SFA associate professor of voice and the production's stage director. "Since many of the students are already familiar with the Three Kings' journey, the opera is only 45 minutes long, and it is written in English, 'Amahl' makes a great introduction to opera."