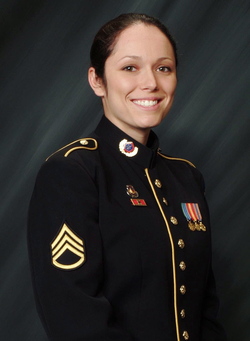 Included on the program are Goff Richards' "Midnight Euphonium" and Philip Sparke's "Harlequin," which takes its inspiration from the happy and sad masks used in Commedia dell'Arte and consists of one slow movement followed by a faster, frenetic movement.

The duo will also perform Joseph Horovitz' "Euphonium Concerto," one of the first major concertos written for the instrument and a standard in the euphonium repertoire. The three movements each represent musical enjoyment for the head, heart and toes, explained J.D. Salas, SFA instructor of euphonium.

As a member of the U.S. Army Field Band, Veronie travels and performs across the nation over 100 days a year. She earned both her bachelor's and master's in euphonium performance from the University of North Texas.

Prior to joining the Field Band, Veronie recorded extensively with the North Texas Wind Symphony, performed with the Dallas Wind Symphony and the Houston Symphonic Band, and was an active soloist, chamber musician and teacher in the Dallas/Fort Worth area.