SFA to present musical comedy, 'How to Succeed in Business Without Really Trying' 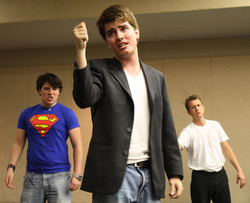 Cast members from SFA's upcoming production of "How To Succeed in Business Without Really Trying" rehearse one of the songs included in the musical comedy. Pictured, center, is Emory junior Jt Hearn, who plays the lead character and is flanked by Weslaco junior Jon Garcia (left) and British exchange student George Boullin. The show, which will run Nov. 16 through 20 in W.M. Turner Auditorium, is a joint presentation of the SFA Schools of Theatre and Music.

NACOGDOCHES, TEXAS - While New Yorkers must wait until the spring to see the Broadway revival of "How to Succeed in Business Without Really Trying," East Texans can attend the Stephen F. Austin State University production of the musical comedy at 7:30 p.m. Tuesday, Nov. 16, through Saturday, Nov. 20. All shows are in W.M. Turner Auditorium on the SFA campus.

The show, which won seven Tony Awards, a New York Critics' Circle Award, and the Pulitzer Prize for Drama, has long been on the "shows to do" lists of director Jack Heifner, SFA playwright-in-residence, and music director Stephen Lias, SFA professor of composition.

"It's such a fun production," said Heifner "And its satirical look at corporate America is still quite timely, even though the show premiered in 1961."

The plot for "How to Succeed in Business Without Really Trying" was inspired by a satirical manual of the same title. The main character, J. Pierrepont Finch, utilizes the manual's suggestions for using flattery, flirting and manipulation-rather than a formal education or innate skill and ability-as he rises from window washer to Chairman of the Board of the World Wide Wicket Company.

As Walter Kerr of the Herald Tribune wrote about the Frank Loesser and Abe Burrows musical in October1961, "It is crafty, conniving, sneaky, irreverent, impertinent, sly, malicious, and lovely, just lovely."

"The same audience who enjoys hit TV show 'The Office' will appreciate the characters and humor of this show as well." Heifner said.

"How to Succeed in Business Without Really Trying" is a joint production of the SFA College of Fine Arts, School of Theatre and School of Music.

Prior to the opening night performance on Tuesday, Nov. 16, Heifner and his student assistant director Brooke Dennis will give a brief lecture about the production at 7 p.m. in Griffith Gallery, located across the hall from Turner Auditorium. The audience is invited back to the gallery after the performance for a reception to meet the cast and honoring the event's corporate sponsor, Tipton Ford-Lincoln-Mercury.