SFA presents 'Side by Side by Sondheim,' a musical revue 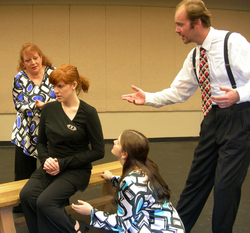 NACOGDOCHES, TEXAS - Songs from Broadway shows such as "West Side Story," "Company" "Follies" and "A Little Night Music" are included in "Side by Side by Sondheim," which the Stephen F. Austin State University School of Theatre will present at 7:30 p.m. Friday, July 9, and Saturday, July 10, and at 2 p.m. on Sunday, July 11, in W.M. Turner Auditorium. The musical revue is part of the School of Theatre's summer season.

Dallas senior Margaret Lewis, who serves as the show's narrator, weaves the musical selections together with background information about the songs and the shows from which they came.

"Audience members will enjoy hearing the familiar tunes and even learning about those that never made it to the stage," said SFA alumna Tabitha Cahanin who serves as the summer season's company manager. "The cast has had a great time learning the wide range of genres the show includes."

"Side by Side by Sondheim," which is directed by SFA Professor of Theatre Alan Nielsen, will be presented for the final times at 7:30 p.m. on Friday, July 16, and at 2 p.m. on Saturday, July 17. Tickets are $12 for adults and $6 for seniors and students. The script contains some adult language.