SFA School of Music director to perform 'Pictures at an Exhibition' 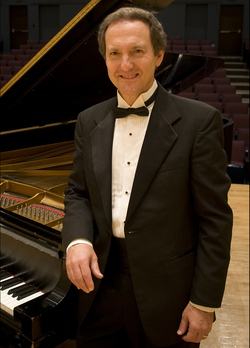 "This landmark piano composition was composed in 1874 and evokes the composer's reflections and moods as he walks a gallery of pictures drawn by his recently deceased friend, Victor Hartmann," explained Roberts. "The work is best known as performed in the orchestrated version by Maurice Ravel."

For the recital, SFA Professor of Art Peter Andrew has created several paintings that were inspired by Mossorgsky's "Pictures at an Exhibition." These will be displayed on stage during Roberts' performance of the work.

"Rather than reproduce the original artworks by Hartmann, I have taken the liberty to interpret the material, updating and personalizing the expression for our time," Andrew explained. "So the music that began as an inspiration from artwork is now itself inspiring artwork."

Dr. Scott Robinson, director of the SFA School of Art, will read quotes from and lyrics by Wilder during Roberts' presentation of the sonata.

Roberts, who joined the SFA music faculty in 2009, has performed in the United States, Canada, Great Britain, India, Australia, Italy, Hong Kong, Taiwan, Thailand, Singapore, Japan and Malaysia. He earned his doctoral degree from the Yale University School Music and his masterÕs and bachelorÕs from the Eastman School of Music.

The recital is a joint presentation of the SFA College of Fine Arts and School of Music and is a part of the Cole Performing Arts Series' inaugural season. Cole Concert Hall is located in the Tom and Peggy Wright Music Building, 2210 Alumni Dr.