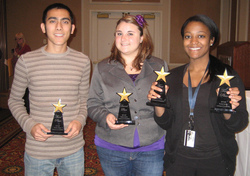 SFA students were members of the top three winning teams at the 2010 American Advertising Federation Student Competition in Houston. Pictured are, from left, Naeem Munaf, Tiffany Occhiogrosso and Traneka Southwell. Southwell and Jamal Peterson, not pictured, were members of the team that created the first-place campaign, "2020 Vision," while working at a Clear Channel Houston outdoor advertising company.

Stephen F. Austin State University students swept the American Advertising Federation Student Competition, winning first-, second- and third-place awards, and they also may have the honor of seeing their ideas utilized in Houston's bid to attract the 2020 World's Fair. Students from universities in Texas, Louisiana and Oklahoma participated in the Nov. 6 competition in Houston.

Rather than working in teams with students from their own university, 17 teams were created so that members worked with students from other schools. Each team worked with a Houston-area business and created a fully integrated advertising campaign for Houston's 2020 World's Fair bid. Twenty-five SFA students represented the School of Art, the Department of Management, Marketing and International Business, and the Division of Communication and Contemporary Culture.

"It was an intense day of work for students, who got information about the client at 8 a.m. and had to have the advertising campaign finished and turned in eight hours," said Dr. Marlene Kahla, SFA associate professor of marketing. "The students were assigned to businesses all over Houston and developed solutions to the marketing challenge."

It was the second time Peterson had attended the competition, but his first time to win. He said he has learned something new each year.

"I didn't have any ideas about the World's Fair until that day," Peterson said. "Traneka and I came up with the idea of 2020 Vision - it just seemed like it would give them the perfect sight of the place to go."

The advertising campaigns created by all 17 teams will be studied by the bid committee to bring the 2020 World's Fair to Houston. According to Manuel Delgado, president of the committee, ideas from all teams in the competition may be used for the actual bid.

Students were sponsored by SFA's Office of Student Affairs and represented the American Marketing Association and AdHoc, SFA's advertising and design club.