SFA Theatre to present 'A Raisin in the Sun' 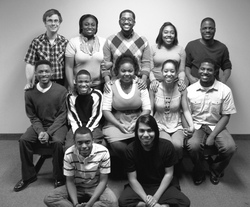 NACOGDOCHES, TEXAS - The Stephen F. Austin State University School of Theatre will present Lorraine Hansberry's "A Raisin in the Sun" at 7:30 p.m. Tuesday, March 2, through Saturday, March 6, in W.M. Turner Auditorium as part of the SFA College of Fine Arts' University Series.

Set in the 1950s on the South Side of Chicago, "A Raisin in the Sun" focuses on the Youngers, an African-American family, and the dreams each of its members is struggling to attain. Conflict arises within the family over how to best use a $10,000 life insurance benefit.

Mama, portrayed by Red Oak sophomore Sharayah Reed, wishes to make a down payment on a house in an all-white neighborhood. Her son, Walter Lee, played by Round Rock junior Waldron Archer, wants to start his own business, and his sister, Beneatha, portrayed by Houston freshman Kara Willis, wants to become a doctor.

"With strength, pride and integrity, the family battles against generations of prejudice to try and achieve their piece of the American dream," said Allen Oster, SFA professor of theatre and the play's director.

Red Oak junior Jessy Dukes, who plays Walter Lee's wife, Ruth, thinks the audience will be able to relate to the Youngers' situation. "Most families have experienced financial problems, dreams as a whole, or just issues within the family itself. It is an amazing play about faith, struggle and never giving up."

In 1961, most of the original Broadway cast, which also included Ruby Dee as Ruth and Louis Gossett Jr. as George Murchison, maintained their roles in a movie version for which Poitier and McNeil received Golden Globe nominations.