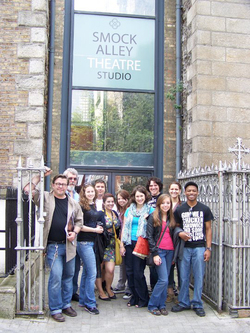 NACOGDOCHES, TEXAS - If asked the proverbial question, "What did you do during your summer vacation?" nine Stephen F. Austin State University theatre students and their professor, Rick Jones, would most probably talk about their recent trip to Ireland.

The trip served as the culmination of the two three-hour courses on Irish theatre and Irish culture the group began in the first summer session.

This is the third year that Jones, who has a specialty in Irish theatre studies, and the SFA School of Theatre have made the international studies opportunity available to SFA students, and each year the program has a profound impact on the students, Jones explained.

"Because the students will actually experience some of what we study while still in Nacogdoches, they are intellectually and emotionally engaged in the classroom. And the quality of their papers and presentations reflect that engagement. Additionally, the knowledge the students acquire before the departure date enables them to better appreciate and understand the sites they see, the lectures they hear and the culture they experience while in Ireland," Jones continued.

The professor theorizes that a chance encounter is a direct result of an Irish citizen observing the students' genuine interest in Irish history.

"I was lecturing to them in front of Smock Alley Theatre Studio, the site of the oldest purpose-built theatre in the English-speaking world and the first brick structure ever built in Ireland. In the middle of my explanation about the site's historical significance, a little man came shambling across the street and asked if we wanted to go inside," Jones related.

Upon agreeing to his offer, the group learned that their tour guide was Kristian Marken, director of Smock Alley. He spent 45 minutes with the group, showing the current renovations being done to the building as well as the excavations that reveal the medieval street on which the structure was built.

At the end of the tour, Marken surprised the group again when he brought back from his office a tangible gift of history-a brick from the original 1662 building.

"We were completely taken back by Marken's generosity," Jones said, "But had he not observed the students taking my lecture seriously, I don't think he would have initiated the tour."

"This was the highlight of the trip for me, because it was so impromptu and unexpected," said Dallas sophomore Jennifer Suter. "Plus, it brought home the lesson that in theatre, good things often happen when you're in the right place at the right time."