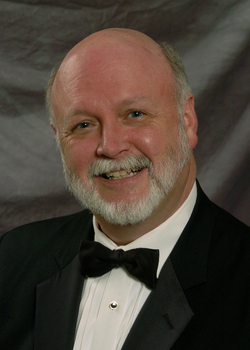 SFA Director of Bands Fred J. Allen will be installed into the American Bandmasters Association during the Oct. 19 concert of the SFA Wind Ensemble, "The Music of Michael Daugherty." The concert begins at 7:30 p.m. in W.M. Turner Auditorium.

NACOGDOCHES, TEXAS - The SFA Wind Ensemble's concert at 7:30 p.m. Tuesday, Oct. 19, in W.M. Turner Auditorium will be special for a three main reasons. First, world-renowned composer Michael Daugherty will be present to hear the ensemble play three of his works in the concert that is titled "The Music of Michael Daugherty."

Second, John L. Whitwell, former SFA director of bands, will return to the auditorium to conduct Daugherty's "Desi," a piece Whitwell commissioned for SFA 20 years ago. Third, Whitwell will take some time during the concert to install Fred J. Allen, SFA director of bands and the Wind Ensemble's conductor, into the American Bandmasters Association.

Membership into the association is by invitation only. Founded in 1929, with John Philip Sousa as honorary life president, American Bandmasters Association recognizes outstanding achievement on the part of concert and band conductors and composers. Current membership includes approximately 300 band conductors in the United States and Canada.

Allen accepted the position of director of bands at SFA in 1994. As the director, he oversees nearly 300 band students involved in the band program, which includes four concert groups, the athletic bands and several chamber groups. He also teaches conducting, orchestration and music education classes. He was the 2006 recipient of the Teaching Excellence Award at SFA for the College of Fine Arts.

Allen has conducted All-Region and All-State Bands throughout Texas and the United States, where he is also an active concert clinician and adjudicator. He has often served as guest conductor for bands playing at the Mid-West Band Convention and the Texas Music Educators Association Convention, and has also conducted the Seoul Wind Ensemble and the Al Fine Concert Band in Taegu, Korea.

The concert is a joint presentation of the SFA College of Fine Arts, School of Music and University Series. W.M. Turner is located in the Griffith Fine Arts Building, 2222 Alumni Dr.

Prior to the concert, Daugherty will speak about his music at 7 p.m. in Griffith Gallery, located across the hall from Turner Auditorium. Immediately after the concert, the audience is invited back to the gallery for a reception honoring Daugherty, Whitwell, Allen and the event's corporate sponsor, Point A Media.