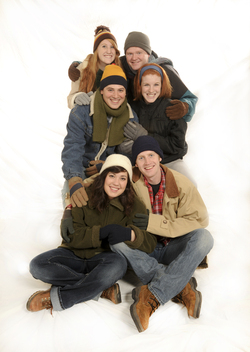 NACOGDOCHES, TEXAS - Character development is an integral part of any actor's preparation for a production, but each of the six SFA theatre students cast in John Cariani's "Almost, Maine" has spent the past five weeks developing three or four characters.

SFA Professor of Theatre Allen Oster said the multiple roles pose particular challenges, but the cast is doing a good job of creating distinctions between their portrayals of the citizens of a small mythical town in Northern Maine.

Cariani's romantic comedy, which the SFA School of Theatre will open on Tuesday, Oct. 5, consists of nine vignettes that show all sorts of couples falling in and out of love, explained Dallas senior Margaret Lewis, who portrays an ex-girlfriend, a wife and a girlfriend.

For example, Dallas junior Rosie Kolbo said she raises her pitch and keeps her gestures close as she plays the very shy Ginette, but she broadens her mannerisms when portraying the confident Waitress.

The students are also drawing on personal experiences as they develop the characters. Weslaco junior Jonathan Garcia said he identifies with his character Jimmy because they both feel awkward when they run into their ex-girlfriends. And Athens senior Caroline Harrell said she relates to her character Hope, who leaves the comfort of her small town and boyfriend to go out into the world to pursue her own dreams.

Oster praised the cast for all they are bringing to the vignettes and to the characters. "Before we began rehearsals, I thought I knew my favorite scenes, but the actors keep finding more and more underlying layers, and, so, I'm finding new favorites."

The director expressed certainty that the audience, too, will enjoy the play that the amNew York describes as "The perfect date show for young and old alike."

A joint presentation of the SFA College of Fine Arts and School of Theatre, "Almost, Maine" will run from Tuesday, Oct. 5, through Saturday, Oct. 9. All shows are at 7:30 p.m. in W.M. Turner Auditorium. It is sponsored in part by Tipton Ford-Lincoln-Mercury.