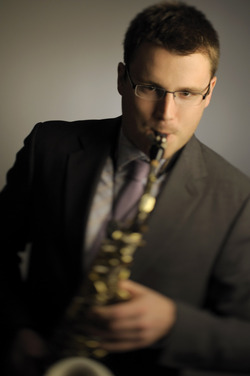 Nathan Nabb, SFA's new associate professor of saxophone, will make his Nacogdoches debut during the final concert of SFA's 2010 Chamber Music in the Pines Festival at 2:30 p.m. Sunday, Aug. 15, in Cole Concert Hall on the SFA campus.

NACOGDOCHES, TEXAS - The Stephen F. Austin State University School of Music's 2010 Chamber Music in the Pines Festival will conclude at 2:30 p.m. Sunday, Aug. 15, in Cole Concert Hall. The final concert, "Something Blue," features "bluesy" and "jazzy" works, according to Jennifer Dalmas, SFA associate professor of music and the festival's director.

Dalmas and pianist Linda Parr, SFA lecturer, will open the concert with "Graceful Ghost Rag" by William Bolcom, and later in the program, cellist Evgeni Raychev and pianist Andrew Parr, both SFA faculty members, will play three pieces for cello and piano by Nicolai Kapustin.

"Both of these composers are known for their accessible, jazz styles of composition," Dalmas said.

Baritone Scott LaGraff, SFA associate professor of music, and his wife, mezzo-soprano Kimberly LaGraff, will sing songs by Cole Porter and George Gershwin, including "So In Love" from Porter's "Kiss Me Kate," and Gershwin's "Summertime" and "I Got Rhythm." The Parrs will serve as collaborative musicians for this portion of the program.

The saxophoniest has performed across the United States and in Asia and Europe with such groups as the St. Louis Symphony, New World Symphony and IRIS Chamber Orchestra. He is currently the soprano chair of the Oasis Quartet, whose debut recording on Innova Records will be released this fall.

Nabb's second solo recording, "Distances," is also due out this fall, and his "Tangled Loops" was released in 2009.

After receiving his undergraduate degree from the University of Illinois Urbana-Champaign, Nabb earned his Master of Music and Doctor of Music from Northwestern University.

Immediately after the concert, the SFA Friends of Music will host a public reception in the lobby of Cole Concert Hall.

Tickets to the concert are $10 for adults, $7.50 for seniors and $5 for students. Advance tickets can be purchased by visiting www.finearts.sfasu.edu or by calling (936) 468-6407 or (888) 240-ARTS during regular business hours. Tickets will be available at the door on Sunday.