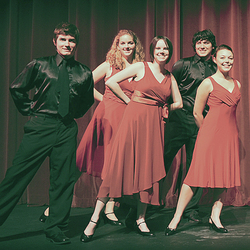 Members of SFA's Original Cast rehearse a number from "Almost Legal," the cabaret troupe's 20th anniversary musical revue, which will be presented at 7:30 p.m. Thursday, April 8, and Friday, April 9, and at 2 and 7:30 p.m. Saturday, April 10. All performances will be in the Downstage Theatre of the Griffith Fine Arts Building on the SFA campus. Pictured, from left, are Jt Hearn, Brenda Truett, Tory Fields, John Garcia and Hannah Cole.

NACOGDOCHES, TEXAS - The Original Cast, a musical cabaret troupe from the Stephen F. Austin State University School of Theatre, will celebrate its 20th anniversary with four performances of "Almost Legal" Thursday, April 8, through Saturday, April 10, in the Downstage Theatre of the Griffith Fine Arts Building on the SFA campus.

The 14-member cast will perform highlights from the 20 years' worth of original musical revues director Allen Nielsen has written for the group.

"We're reviving some of our favorite routines and giving the audience a chance to see some things they might have missed the first time around," Nielsen said.

The troupe will be performing segments from several of the revues originally presented in the '90s, such as radio sketches from "Broadway on the Air" and the '50s revue "C'est Cheeze!" The program also includes portions of the musical about Stephen F. Austin, "The Reluctant Rebel."

The Original Cast will also present highlights from more recent revues, including a song from "110° in the Shade," which they performed in Singapore in 2006, and portions of the 2007 "Playing the Palace" vaudeville show and the 2008 "Babes Off Broadway."

The show's finale is taken from the radio show revue-the telling of the entire history of American musical comedy, from the 1866 "The Black Crook" to the 2003 "Wicked."