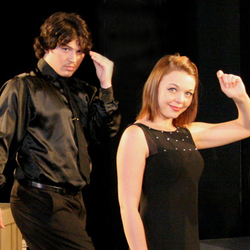 SFA students Jonathan Garcia and Hannah Cole present one of the choreographed songs included in a recent performance by The Original Cast, SFA School of Theatre's musical comedy cabaret troupe. The group will be presenting four performances of "A Nacogdoches Pioneer Christmas" during the first weekend in December as part of the Nine Flags Festival.

The original musical revue, which celebrates the many immigrant groups who settled Texas, was written by Dr. Alan Nielsen, SFA professor of theatre and the troupe's director. The show will be presented at 7:30 p.m. Friday, Dec. 3; 2 and 9 p.m. Saturday, Dec. 4; and 2 p.m. Sunday, Dec. 5. All performances are in The Cole Art Center @ The Old Opera House, 329 E. Main St.

The 90-minute show, which is suitable for the entire family, includes singing and dancing by the 17-member troupe.

"Many of the songs will be familiar to the audience," said Nielsen. "We've even included an audience sing-along to a medley of Christmas carols from the various cultures."

The last third of the 90-minute show is similar to the school pageants that were presented in one-room schoolhouses.

Tickets are $8 for adults and $5 for students. Tickets are available through the Nacogdoches Convention and Visitors Bureau by calling (936) 564-7351.

Seating is limited, so patrons are encouraged to purchase their tickets in advance.