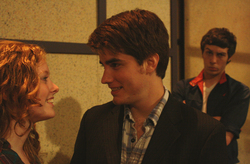 Lead characters from SFA's upcoming production of "How To Succeed in Business Without Really Trying" rehearse a scene from the musical comedy. In this scene, Rosemary and J. Pierrepont Finch, portrayed by Amelia Fultz and Jt Hearn, gaze into one another's eyes as Bud Frump, played by Matthew Phillips, plots how he will destroy Finch's business career.

NACOGDOCHES, TEXAS - The 34 cast members have memorized their lines, lyrics and dance steps; the 21-piece orchestra has mastered the score; the costume crew has finished the "Paris Original" dresses; and the scenic, lighting and sound crews have transformed the stage into an international business's towering headquarters.

In short, the Schools of Theatre and Music at Stephen F. Austin State University are ready to present their five-night run of "How to Succeed in Business Without Really Trying" at 7:30 p.m. Tuesday, Nov. 16, through Saturday, Nov. 20, in W.M. Turner Auditorium.

The award-winning musical comedy that satirizes life in the executive suite was first produced on Broadway in 1961 and received seven Tony Awards and the Pulitzer Prize for Drama. The plot centers on a window washer who quickly becomes chairman of the board of the World Wide Wicket Company by following the advice of a self-improvement manual.

Although the script is almost 50 years old, cast member Shelby Bray, LaPorte freshman, says it is still relevant today. The show mocks the 'big business' attitude in America, putting a satirical twist on the idea that no matter how people start off in life, they can rise to the top."

"And with all the corporate scandals going on today, everyone can appreciate a good satire on corporate life, ambition and greed," added junior Justin Lee Hughes.

According to Houston junior Samantha Walker, part of what makes the show so enjoyable is the audience's ability to identify with the situations on stage and laugh along with work place "drama" such as running out of fresh coffee.

The audience will also recognize their own co-workers in some of the characters, such as the "office creep" or the "office eye candy," said British exchange student Iggy Scott.

Hughes added that his own character is the stereotypical boss for whom many audience members might have worked. "He might not know what everyone below him is doing, but he knows he's in charge, and he makes sure everyone else knows it too."

Director Jack Heifner, SFA playwright-in-residence, said the cast and crews have risen to the challenge of staging such a large show and are looking forward to sharing it with the audience.

"How to Succeed in Business Without Really Trying" is a part of the SFA College of Fine Arts' University Series.

Prior to the opening night performance on Tuesday, Nov. 16, Heifner and his student assistant director, Brooke Dennis, will give a brief talk about the production at 7 p.m. in Griffith Gallery, located across the hall from Turner Auditorium. The audience is invited back to the gallery after the performance for a reception to meet the cast and honor the event's corporate sponsor, Tipton Ford-Lincoln-Mercury.