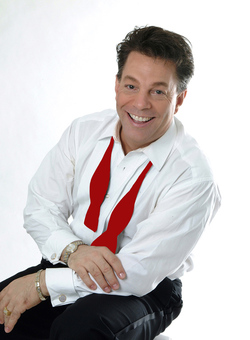 Pop sensation Steve Lippia and his big band will present "Simply Sinatra Christmas" at 7:30 p.m. Friday, Dec. 17, in W.M. Turner Auditorium as part of the SFA College of Fine Arts' University Series. The vocalist is renowned for his authentic-sounding renditions of songs made famous by Frank Sinatra.

NACOGDOCHES, TEXAS - A concert of classic songs performed in the style of one of America's favorite crooners is coming to W.M. Turner Auditorium at 7:30 p.m. Friday, Dec. 17, as the Stephen F. Austin State University College of Fine Arts presents "Simply Sinatra Christmas" as part of the 2010-2011 University Series.

"In this wonderful blend of holiday cheer and memories, pop sensation Steve Lippia and his 16-piece band will present Christmas favorites such as 'Let it Snow,' 'The First Noel' and 'White Christmas,' all in the style of Ol' Blue Eyes himself," said Sylvia Bierschenk, director of Arts Information.

"I've seen Steve perform on two different occasions," said Dr. John W. Goodall, associate dean of the SFA College of Fine Arts. "Both times I was amazed at how much he sounded and even moved like Frank Sinatra. Patrons of all ages are going to love this show!"

Using the arrangements written specifically for Sinatra's big band, Lippia's musicians add another layer of authenticity to "Simply Sinatra Christmas." Lippia and the band will also perform non-holiday Sinatra standards such as "Come Fly With Me" and "New York, New York."

Lippia has headlined in extended engagements in Las Vegas and Atlantic City and has performed to sold-out audiences with major North American symphonies such as those in Philadelphia, Vancouver, Fort Worth and Saint Louis.

His television appearances include "Extra," Fox's "Good Day New York" and CNN's "Showbiz Today." His most recent of three compact discs, "Steve Lippia in Concert," was released in 2009.

Visit stevelippia.com to hear samples of his singing or learn more about the vocalist.

Prior to the concert, there will be an informative talk at 7 p.m. in Griffith Gallery, located across the hall from Turner Auditorium. The audience is invited back to the gallery after the performance for a reception honoring the event's corporate sponsor, Nacogdoches Medical Center Hospital. W.M. Turner is located in the Griffith Fine Arts Building, 2222 Alumni Dr.