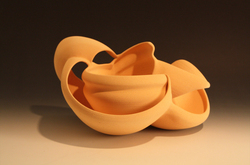 NACOGDOCHES, TEXAS - The School of Art at Stephen F. Austin State University has announced that works by three SFA alumni will be included in "Texas National 2010," which will open at 5 p.m. Saturday, April 10, in the Ledbetter Gallery of The Cole Art Center @ The Old Opera House, located at 329 E. Main St. The show will run through Saturday, May 22.

Among the 191 pieces selected for the national juried exhibition are "Frustration" and "Intensity," by Kira Kalondy, who earned her Master of Fine Arts in 2009 and is currently serving as adjunct faculty in the SFA School of Art.

Created by the SFA School of Art, "Texas National" is celebrating its 16th year on the national scene, said Christian Cutler, the university's director of galleries. The competition is open to all artists living and working in the United States and is juried each year by an internationally acclaimed artist.

More than 600 artists from 40 states entered this year's competition. Works by 162 artists from 28 states were chosen for the exhibition, and cash prizes totaling $4,500 will be awarded to three artists during the show's opening from 5 to 7 p.m. Saturday, April 10.

American artist Judy Pfaff is serving as the juror for this year's event. She will give a gallery talk during the opening reception and announce the winners at 6 p.m. Running concurrently with "Texas National 2010" upstairs in the Reavley Gallery will be "Judy Pfaff: Drawings and Prints."

Regular hours for The Cole Art Center are 12:30 to 5 p.m., Tuesday through Friday, and 10 a.m. to 5 p.m. on Saturday. Both "Texas National 2010" and "Judy Pfaff: Drawings and Prints" are sponsored in part by Wells Fargo Advisors of Nacogdoches, SFA Friends of the Visual Arts and Nacogdoches Junior Forum.