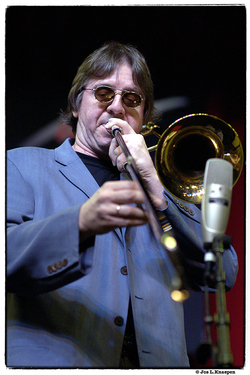 Referred to as "the best trombonist on the planet" by jazz great Eddie Palmieri, Herwig has recorded 18 albums as a leader and over 200 total albums since beginning his professional career in 1980. His latest album, "Latin Side of Wayne Shorter," received a 2009 Grammy nomination for Best Latin Jazz Album.

In constant demand as a sideman, Herwig has been a featured member in the Joe Henderson Sextet, Horace Silver Octet, Tom Harrell's Septet and Big Band, and the Joe Lovano Nonet. The trombonist also performs and records with Palmieri's La Perfecta II and Afro-Caribbean Jazz Octet, Paquito D'Rivera's Havana-New York Connection, and the Mingus Big Band.

Currently a professor of jazz studies at Rutgers, The State University of New Jersey, Herwig is a highly sought-after jazz educator who has received performance and teaching grants from the National Endowment for the Arts and conducted master classes, seminars and workshops for universities and conservatories around the world..

During the Nacogdoches concert, the Swingin' Axes and Herwig will perform works by Coltrane, George Gershwin and Charles Minus, including some of Herwig's own arrangements.

Prior to Herwig taking the stage, the Swingin' Aces and Swingin' Axes will each perform a set. The Aces are directed by SFA Assistant Professor of Trombone Deb Scott, and Associate Professor of Trumpet Gary Wurtz directs the Axes.

Scott will give a brief talk about the program at 7 p.m. in Griffith Gallery, across the hall from Turner Auditorium. The public is invited to return to the gallery after the concert for a reception honoring the event's corporate sponsor, Elliott Electric Supply.