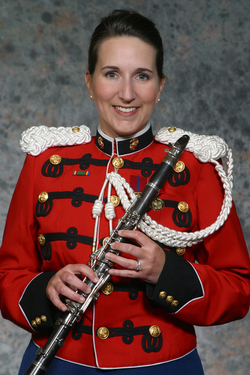 Gunnery Sgt. Vicki Gotcher, a native of Jacksonville and an SFA alumna, will be the clarinet soloist during the SFA Wind Ensemble's concert at 7:30 p.m. Monday, Nov. 21, in W.M. Turner Auditorium.

The Jacksonville native, who graduated from SFA in 1993 and received her master's degree in clarinet performance from Northwestern University, is a member of "The President's Own," the United States Marine Band in Washington, D.C.

"This is something we've been working on for two years," said Fred J. Allen, SFA director of bands and of the Wind Ensemble. "It is exciting to have a professional musician perform with us, especially one who has ties to the university and our area."

Prior to joining "The President's Own," Gotcher performed with the Milwaukee Ballet Orchestra, Kenosha Symphony and Chicago Civic Orchestra, as well as participated in the Spoleto Music Festival, National Repertory Orchestra in Breckenridge, Colo., and Aspen Music Festival.

Another highlight of the concert will be the U.S. premiere of "Mount Rainier Search and Rescue" by SFA Professor of Composition Stephen Lias. It will be guest conducted by Justin Allen, graduate student from Spring.

"This piece was first performed this past summer in Taiwan, by a professional chamber music group called XPlorium," said Allen. "It portrays the rescue attempts made to save an injured mountain climber on the famed Mount Rainier and is a part of Lias' series of compositions related to U.S. National Parks."

The concert is a joint presentation of the SFA College of Fine Arts and School of Music. W.M. Turner Auditorium is located in the Griffith Fine Arts Building, 2222 Alumni Dr.