Bluegrass masters to perform at SFA 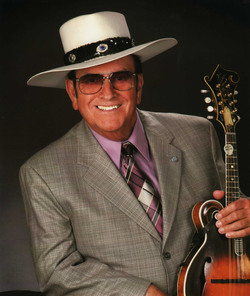 Legendary musician Bobby Osborne will be one of featured performers included on the American Bluegrass Masters Tour, which the Stephen F. Austin State University College of Fine Arts will present at 7:30 p.m. Thursday, April 7, in W.M. Turner Auditorium on the SFA campus. Photo by Lance LeRoy.

NACOGDOCHES, TEXAS - Top names in the world of bluegrass music will grace the stage of W.M. Turner Auditorium when the American Bluegrass Masters Tour closes the 2010-2011 University Series at 7:30 p.m. Thursday, April 7. The concert is a presentation of the Stephen F. Austin State University College of Fine Arts.

"We've got a great line-up of entertainers who'll fill the auditorium with the best of today's Bluegrass," said Dr. John W. Goodall, associate dean of the College of Fine Arts.

According to his publicist, "fans and critics the world over consider (Bobby) the greatest bluegrass singer in history!"

Shelor, who has been playing the banjo since age 5, has been named Banjo Player of the Year by the International Bluegrass Music Association on four separate occasions and was inducted into the Virginia Music Hall of Fame in 2009. He has been a member of the Lonesome River Band since 1989, recording dozens of successful albums. He was also one of several artists featured on "Knee Deep in Bluegrass," which was named the 2001 Instrumental Album of the Year by the IBMA.

Burch moved to Nashville in 1971 and since then has collaborated with a number of artists. Career highlights thus far include a 1995 Grammy for his contributions to "The Great Dobro Sessions," and his involvement with the Grammy Award-winning soundtrack for "O Brother, Where Art Thou?"