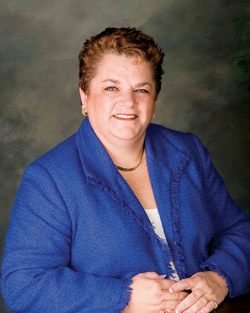 Dr. Nancy Dickey, president of the Texas A&M Health Science Center and vice chancellor for health affairs for the Texas A&M System, will be the commencement speaker at Stephen F. Austin State University on Saturday, Dec. 17.

A 1972 graduate of SFA, Dickey has established a successful career in the health profession and has become a prominent figure in healthcare education. In 1997, she was the first female to be elected president of the American Medical Association where she made strides in patient rights and advocacy during her tenure.

Before serving as AMA's president, Dickey served as chair of the association's Board of Trustees and headed the AMA's Council on Ethical and Judicial Affairs. She also chaired the Texas Medical Association's Patient-Physician Advocacy Committee and is active in both the American and Texas Academy of Family Physicians.

Dickey received her M.D. and residency training at the University of Texas Medical School at Houston. She then established a family medicine practice and later transitioned into a career in higher education.

Nominated as a Local Legend by State Rep. John R. Carter, Dickey is widely known for her commitment to community service, medical leadership and patient advocacy. She recently was honored as a 2010 inductee into the Texas Women's Hall of Fame by the Governor's Commission for Women.

Dickey has been awarded five honorary doctoral degrees and was elected to the prestigious Institute of Medicine and the Society for Executive Leadership in Academic Medicine. She writes for several medical and health policy journals, is an internationally known public speaker, and is the editor for both an online and print journal.