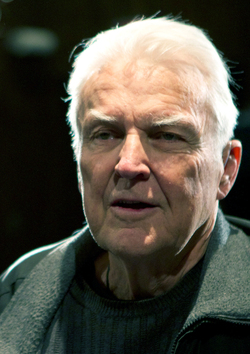 NACOGDOCHES, TEXAS - Emmy Award-winning screen and stage actor Anthony Zerbe will present his nationally acclaimed performance of "It's All Done with Mirrors … an avalanche of e. e. cummings" at 7:30 p.m. Wednesday, April 6, in W.M. Turner Auditorium on the SFA campus.

"In this uncommon mix of theatre and salon, Zerbe provides joyous access to the art and energy of one of America's most beloved poets, moving pell mell through a parade of characters, accents and dazzling word play," explained his publicist, Ann Patrice Carrigan.

"It's hard to think of a living actor with broader and deeper experience than Anthony Zerbe," said Scott Shattuck, director of the SFA School of Theatre, which is cosponsoring the residency. "What an extraordinary opportunity for our students to interact directly with one of the most acclaimed and respected professionals in their field, and what a wonderful chance for all of us to see a master actor perform great poetry."

Zerbe has appeared in more than 50 films, ranging from 1967's "Cool Hand Luke" to "The Matrix Reloaded" and "The Matrix Revolutions" in 2003, as well as practically countless television appearances. He won a Primetime Emmy Award in 1976 for his role as police Lt. K.C. Trench in the acclaimed private-eye series "Harry O."

He co-starred with Elizabeth Taylor in the 1981 Broadway revival of "The Little Foxes," one highlight of a stage career in which he has also played Iago opposite James Earl Jones' Othello and the title role of Cyrano de Bergerac at two of America's leading regional theatres, the Long Wharf in New Haven and Huntington Theatre Company in Boston.

Some of Zerbe's best-known film roles are Matthias, the sinister cult leader in "The Omega Man"; Toussaint in "Papillon"; Rosie in "The Turning Point"; Roger Stuart in Stephen King's "The Dead Zone"; James Bond villain Milton Krest in "License to Kill"; and Vice-Admiral Dougherty in "Star Trek: Insurrection."

On network television, Zerbe has guest starred in dozens of popular series, from "Naked City" and "Route 66" to "Frasier" and "Judging Amy." From 1989 to 1992, he co-starred with Josh Brolin and Stephen Baldwin in "The Young Riders."

Zerbe is appearing at SFA as the 2011 Schmidbauer Artist-in-Residence and as a joint presentation of the SFA College of Fine Arts, School of Theatre and School of Art. Tickets for Wednesday's performance of "It's All Done With Mirrors" are $6 for adults and $3 for seniors and students. For tickets or more information, please go to www.finearts.sfasu.edu or call (936) 468-6407 or (888) 240-ARTS.