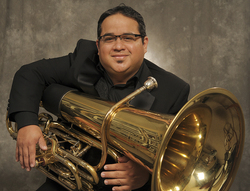 "Each year, universities across the United States participate in this national event in which tuba and euphonium players present recitals and ensemble concerts," explained Dr. J.D. Salas, SFA assistant professor of tuba.

"The performances serve to educate the audiences about these instruments that are not often known for their beautiful singing melodies and virtuosic technical lines," Salas continued. "SFA will have five such performances this month."

For his own faculty recital at 7:30 p.m. Tuesday, Oct. 4, in Cole Concert Hall, Salas has chosen a program that "will reveal the full dynamic and technical capabilities of the tuba in both a solo and chamber music setting."

Pianist James Pitts, SFA staff accompanist, will collaborate with Salas in presenting Leonard Bernstein's "Waltz for Mippy III," a short work named for a mongrel dog that belonged to Bernstein's brother, and SFA professor Charles Gavin will join the duo in performing "Divertimento for Tuba, Horn, and Piano" by Trygve Madsen.

Salas and Scott Harris, SFA associate professor of percussion, will play Michael Harwood's "Residue for Tuba and Vibraphone," a piece which requires Harris to alter the vibraphone by adding coins or other metal objects to the keys.

A member of the SFA faculty since 2006, Salas recently received his Doctor of Musical Arts from the University of Kentucky in Lexington, where he also earned his master's degree. The native of Alamo, Texas, received his bachelor degree from Baylor University.

Salas has performed regularly with the Louisville Orchestra, Lexington Philharmonic Orchestra and the Shreveport Symphony Orchestra. He is currently a member of the SFA Brass Quintet.

The program will include the world premiere of Paul Ferguson's "Some Re-assembly Required," Barbara York's "Sonata for Euphonium (Child's Play)," and Antonio Capuzzi's "Concerto for Double Bass."

"Mr. Scott's performance is highly relevant for our SFA students since he is an active educator who has maintained a high level of performance on top of his teaching duties," Salas said.

Both recitals are a joint presentation of the SFA College of Fine Arts and School of Music and part of the Cole Performing Arts Series. Tickets for each are $5 for adults, $4 for seniors and $2 for students. For tickets or more information, please go to www.finearts.sfasu.edu or call (936) 468-6407 or (888) 240-ARTS.