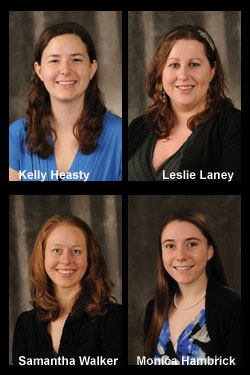 New this year to the ceremony was the awarding of the first College of Fine Arts Faculty Dean's Award to Dr. Charles R. Gavin, professor of horn.

"This award is intended to make a strong statement to all College of Fine Arts faculty-that even though the award goes to only one person, this person is a symbol of the esteem in which each and every faculty member is held and the pride everyone takes in the work of the faculty," said Himes.

The awards were established by the Dean's Circle, an auxiliary group of community members founded in 2008 and "dedicated, in part, to nurturing potential young artists within the College of Fine Arts and recognizing excellence within the faculty," Himes said.

Hambrick, who received the Dr. Robert G. Sidnell Memorial Dean's Award in Music Education, has been active in numerous ensembles, including the Lumberjack Marching Band, Wind Ensemble and Orchestra of the Pines, and has served as a volunteer during music competitions and as a counselor during summer Band Camps.

She has begun preparing for her future role as a music educator by teaching private horn and piano lessons through SFA's Music Preparatory Division and by tutoring music history.

Heasty, the recipient of the Ed and Gwen Cole Dean's Award in Art, is pursuing a Bachelor of Fine Arts. Although she was an inexperienced artist when she came to SFA, she has excelled in the fields of sculpture and drawing. She was chosen to be a Spotlight Artist in 2010, and her work has been shown in the "Filling the Void" exhibition and at Tabu Coffee.

She has provided service to the School of Art during Showcase Saturdays and SFA's Art Day, and she is a co-founder of the SFA Sculpture Club.

Laney, who was awarded the Jack and Doris Ledbetter Dean's Award in Music, is a member of the Madrigal Singers and the A Cappella Choir. She has had roles in SFA's productions of "Gianni Schicchi," "Susannah," and "Amahl and the Night Visitors," and most recently portrayed Rosalinde in "Die Fledermaus." She was selected as a soloist for SFA's most
recent production of Handel's "Messiah" and has sung with Opera East Texas and the Longview Community Theater.

After graduation, Laney hopes to pursue a Master of Music in vocal performance.

Walker, who received the George and Peggy Schmidbauer Dean's Award in Theatre, has appeared in SFA's mainstage productions of "The Elephant Man," "Picnic," "Twelfth Night" and "How to Succeed in Business Without Really Trying" as well as several student-directed productions.

She has also served on various props, paint, load-in and light hang crews and has assisted with SFA's One-Act Play Clinics.

Gavin, who earned a Doctor of Musical Arts from the University of Iowa, has been a member of the SFA faculty since 1984. He currently performs with the Stone Fort Wind Quintet, SFA Brass Quintet and several regional orchestras.

His former students are directors of Texas Honors Bands and faculty members at the University of Michigan, University of Alabama, Ithaca College, Texas A&M University and East Texas Baptist University. Other students' experiences range from being a Hollywood studio artist to performing with the Dallas Symphony Orchestra and in European concert venues.

Gavin was introduced by Dr. Ronald Anderson, former director of the School of Music and current interim chair of the Department of Psychology, and awarded $3,000. Each recipient was given an opportunity to speak.

"The Dean's Awards are about imbuing faculty and students with pride and self-confidence to pursue the ideal," said Himes. "The intent is for each recipient to dream what the ideal could be and to inspire them to use this award to go about making that ideal their reality." 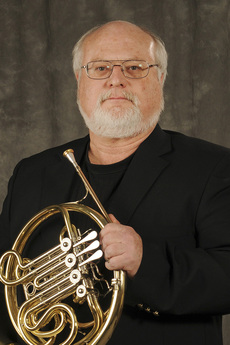