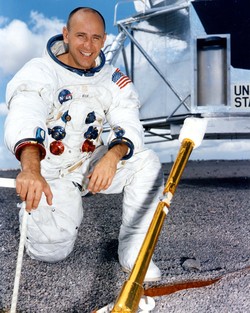 Apollo 12 astronaut Alan Bean, the fourth man to walk on the moon and an award-winning artist, will be the featured guest at the event titled "Leaving an Impression One Step at a Time." The conversation will begin at 7:30 p.m. Thursday, April 14, in the Grand Ballroom of the Baker Pattillo Student Center on the SFA campus.

Reserve tickets are $75 and available for purchase at www.sfasu.edu/archie. These tickets include a private reception with Bean starting at 6 p.m. in the Twilight Ballroom and priority seating during the speaking event.

Free passes for general admission seating may be picked up at the SFA Involvement Center located on the first floor of the student center or at the downtown Nacogdoches Visitors Center, 200 E. Main St.

"Alan Bean is a member of a most exclusive group - one of 12 people who have walked on the moon and captured the focus and imagination of the nation and the world during the apex of manned space exploration," Dr. Archie McDonald said. "Our speaker series is delighted to feature a fellow Texan who has viewed our world from a perspective few others have experienced."

SFA's speaker series, which debuted last spring, was created to honor and preserve McDonald's legacy as a distinguished scholar, educator and community commentator. A prominent national figure will be hosted annually at SFA to discuss contemporary cultural issues - from politics to art - in the tradition of McDonald's writings and oral presentations. The annual event is sponsored by SFA's Student Government Association and College of Liberal and Applied Arts.

McDonald has taught history at SFA for 46 years and served as director of the East Texas Historical Association and editor of the association's journal for 37 years. He is a past president of the Texas State Historical Association, past vice chair of the Texas Historical Commission and author/editor of more than 20 books on historical topics. Along with teaching, McDonald currently serves as the SFA university/community liaison and is a weekly commentator on Red River Radio in Shreveport.