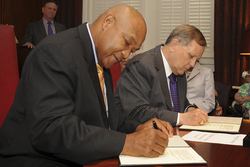 Former heavyweight champion boxer George Foreman (left) and SFA President Baker Pattillo sign the agreement formalizing Foreman's donation of his personal collection to the university's East Texas Research Center. The gift was formally accepted by the SFA Board of Regents at a meeting Tuesday.

Foreman, a native of Marshall, said he decided to make the gift to SFA so that his children and grandchildren would understand the importance he placed on education, and so that he would be remembered for being more than just a boxing champion.

The East Texas Research Center is located in the Ralph W. Steen Library at SFA. It houses manuscripts, photographs, maps, books and other primary resources, including oral histories, county records, political papers and the permanent inactive records of the university. It also is the official repository for the East Texas Historical Association and the Texas State Genealogical Society.

"The influence of the ETRC reaches much further than our campus," said Dr. Ric Berry, SFA provost and vice president for academic affairs. "It holds official papers for a number of East Texas families and well-known personalities. This resource is made use of by researchers from around the country."

In formally accepting the collection, Steen Library Director Shirley Dickerson promised Foreman that the documents and recordings will be carefully preserved and made accessible to the public.

"It is an honor to receive this collection, which will help identify Steen Library as a key cultural resource center for students, educators, researchers and the public at large," Dickerson said. "All of this serves as a valuable contribution to the rich heritage of East Texas."

Foreman's gift was announced Tuesday at a meeting of SFA's Board of Regents, during which Foreman also accepted the university's Lifetime Cultural Achievement Award. The award was created to honor participants in the Archie McDonald Speaker Series. Foreman was the honored guest at the first installment of the series in April 2010, but the accompanying medallion had not yet been designed. It was presented to Foreman Tuesday in conjunction with the announcement of his gift to the ETRC.

While presenting the medallion to Foreman, SFA President Baker Pattillo said, "This is an award no challenger can take away from you."