Guest pianist to perform 'Music of Franz Liszt' at SFA 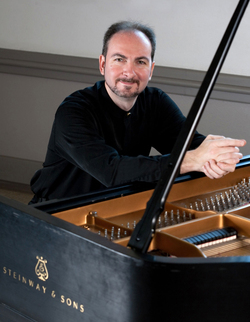 Guest pianist Jura Margulis will present "Music of Franz Liszt" at 7:30 p.m. Thursday, Feb. 10, in Cole Concert Hall on the SFA campus. The recital is a part of the SFA School of Music's Cole Performing Arts Series.

Among the works to be performed are "Mephisto Waltz" and "Sonata in B minor," both of which reveal traits of Liszt the showman and Liszt the poet, explained Dr. Andrew Parr, SFA professor of piano.

"Piano enthusiasts will appreciate the technical virtuosity of Liszt's compositions and the artistic manner in which a top-level performer such as Jura Margulis handles them," Parr continued. "The program is a major event of the season!"

Russian-born Margulis, who is the inaugural holder of the Emily J. MacAllister Endowed Professorship in Piano at the J. W. Fulbright College of the University of Arkansas, Fayetteville, is an internationally recognized performer.

He has won prizes in more than a dozen international competitions and is a recipient of the Pro Europa prize awarded by the European Foundation for Culture.

Margulis has recorded seven compact discs for Sony, Ars Musici and Oehm Classics that cover a wide repertoire. Of his most recent CD (2009), All Music Guide wrote, "This CD is one of the best played, best interpreted, best programmed recitals of piano music of the year."