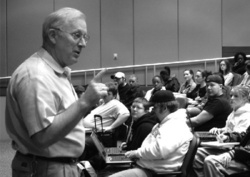 "Cancer awareness has been a critical part of my life mostly because I have had to deal with so much cancer myself," Olson said. "In addition to being an important element of my personal life, research and writing about cancer has become a focus of my professional life, as well."

The Johns Hopkins University Press nominated Olson's book for the Pulitzer Prize in history. It won the 2002 History of Science category award from the Association of American Publishers and the Los Angeles Times recognized his book as one of the best non-fiction books in America for 2002.

"In 1981, when I was first diagnosed, I decided to begin reading in the field of cancer and cancer history, and it resulted in the book 'A History of Cancer: An Annotated Bibliography'," Olson said.

After his amputation in 1987, Olson began work on "Bathsheba's Breast," which was published in 2001.

The book provides a history of breast cancer beginning with Queen Atossa, from Babylon in 490 B.C., to Dr. Jerri Nielson, who was trapped in Antarctica in 1999 with breast cancer.

The book chronicles advances in breast cancer treatment and diagnosis and the uncertainty that women face about the disease and the choices they make.

"By the time 'Bathsheba' actually was released, I had been diagnosed with brain cancer," he said. "This prompted me to write my most recent work 'Making Cancer History: Disease and Discovery at the University of Texas M.D. Anderson Cancer Center'."

Olson graduated in 1967 from Brigham Young University with a bachelor's degree in history. He received both his master's and doctoral degrees in history from the State University of New York at Stony Brook in 1969 and 1972. He has been involved in writing or editing more than 30 books. Olson has been married for 44 years and has four children and 17 grandchildren.