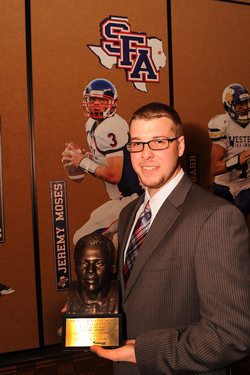 "It is a tremendous honor to receive this award," said Moses. "But it is a big deal not because it is our version of the Heisman Trophy, but because Stephen F. Austin has never won the honor before and I'm happy to be to bringing it home to SFA. Similar to winning back-to-back Southland Conference titles, it is another piece of history that this team has been able to achieve."

Established in 1987, the Walter Payton Player of the Year award is presented annually to the most outstanding college football player at the FCS level. The winner is chosen by a nationwide panel of media members and college media relations directors.

Moses was the catalyst for the nation's most prolific passing offense each of the past two seasons. The Lumberjacks led the country, averaging better than 360 yards per game, and were also ranked among the nation's top six in scoring offense and total offense.

Moses has ranked at or near the top in the country in nearly every statistical category in each of the past three seasons. A 2009 Walter Payton Award finalist, Moses led the nation in completions and passing yards, finished second in total offense and sixth overall in points responsible for.

"Jeremy has been the foundation for what we've been able to accomplish, and for what we hope to do in the future," said SFA head coach J.C. Harper. "Most people look at the numbers and think he is just the product of the system, but we are able to do what we do because of his talent. Jeremy had a tremendous season, but the award is more of a career achievement honor for him. He has been a model of consistency since he stepped on campus."

Moses entered his final season as the school's all-time leading passer, and owned all the conference career marks by the midway point of the 2010 season. Moses closed out his career as one of the NCAA's all-time greatest quarterbacks setting a NCAA FCS career record for completions (1,184) and finishing among the FCS all-time top 10 in total offense (13,201), passing yards (13,401) and touchdown passes (121). Those numbers also place him among the NCAA's top 25, regardless of division, in all four categories.

"I am extremely happy for Jeremy and all that he has accomplished as a Lumberjack," said SFA Director of Athletics Robert Hill. "He will go down as one of our all-time greatest. He has represented SFA to the utmost of his ability and I feel extremely fortunate to have been here to watch him set record after record. We have truly been in the presence of greatness these past four seasons."