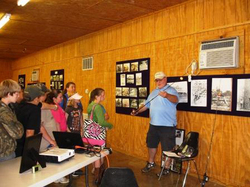 "We plan to make this an annual event, and the local volunteers who came out to assist really helped make the new program a success," said David Treadaway, director of the conservation center.

The Texas Game Warden Association purchased and contributed an additional 200 pounds of channel catfish to the already established fish population of the center's five-acre lake. The association also loaned 60 rods and reels for the program.

"I believe this was the best KidFish program that I have participated in during my many years as a game warden," said Texas Parks and Wildlife Game Warden Jeff Cox. "When you have 82 kids and the fish are biting, you need lots of help. To my knowledge, every child that participated was able to catch a fish."

The day began with short classes on casting, conservation, rigging, fish identification and safety. Then the excitement began with kids immediately catching perch, bass and catfish, while volunteers removed the fish and re-baited the barb-less hooks.

"Those kids kept all of the volunteers busy because many of the students had never fished previously," said Michael Evans, San Augustine Lions Club member. "This was why the Lions wanted to be a part and show these students about the fun and excitement that is found when catching fish."

The idea for a local KidFish program began with San Augustine Game Warden Johnny Jones, who mentioned the need to Treadaway. When they began to organize the program, they immediately identified the need for outside sponsors to assist in purchasing prizes, food and equipment. Treadaway said Kenny Fowler and Nell McBride of First Bank and Trust in San Augustine were the first to offer assistance to the program, followed by the San Augustine Lions Club.

"It was unbelievable how both of these sponsors were willing to step up and assist in this new youth program," Jones said. "They not only offered financial assistance, but volunteers as well. Then other sponsors, such as Powell Park Marina, American Angler, Will Kirkpatrick and the San Augustine Chamber of Commerce, offered to provide assistance."

"From the number of fish caught, prizes won and the smiles on their faces, there is no question about the success of the KidFish Conservation Program, and we look forward to participating again next year," said Zack Weems, San Augustine elementary School principal. 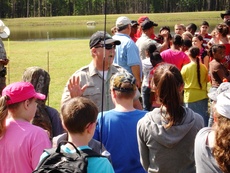