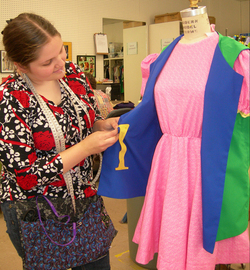 League City senior Rebecca Mersinger works on a costume for the family-friendly children's musical, "Schoolhouse Rock Live!" The Stephen F. Austin State University School of Theatre will open the show at 6:30 p.m. Friday, June 24, as part of its summer theatre season, "Thrills, Chills! Exclamations!" Go to www.finearts.sfasu.edu or call (936) 468-6407 for tickets to the musical or to the ghost story, "The Uninvited."

NACOGDOCHES, TEXAS - The fun, educational songs such as "Conjunction Junction" and "Just a Bill" from the Saturday morning cartoon programming of the 1970s, '80s and '90s are coming to W.M. Turner Auditorium as the Stephen F. Austin State University School of Theatre presents "Schoolhouse Rock Live!" as part of its 2011 summer theatre season.

Twenty-one three-minute songs that have taught generations of American children the basics of grammar, math, science, history and civics are woven together in a fun script about an anxious first-year teacher, played by Benn May, Commerce junior.

"The other characters are actually various aspects of the teacher's personality, visiting him to sing songs about the subjects he will be teaching and reassuring him that he knows these topics well," said Professor Scott Shattuck, director of the SFA School of Theatre and of the show.

The teacher's renewed enthusiasm for his chosen profession makes this a 'feel-good show' that will appeal to everyone," May said.

The production also has universal appeal because of the variety of musical genres represented in the songs, explained Lufkin graduate student Aden Kent Ramsey, the show's musical director. "For instance, 'Verb: That's What's Happening' is a pop song, while 'Sufferin' Till Suffrage' has a Motown feel. 'The Preamble' is done in a country and western style, and 'A Victim of Gravity' is reminiscent of a 1950s doo-wop songs."

Ramsey went on to say that he is very impressed with the talented cast and their ability to master the lyrics, complicated harmonies and choreography. Only brief dialogues occur between the songs, so the six cast members spend most of their time on stage singing and dancing.

"It's a very high energy show!" May exclaimed.

The other show included in SFA's summer theatre schedule is Tim Kelly's classic ghost story, "The Uninvited." It will be presented at 7:30 p.m. Wednesday, June 29; Thursday, June 30; Tuesday, July 5; Friday, July 8; and Tuesday, July 12. A 2 p.m. matinee will be offered on Saturday, July 9.