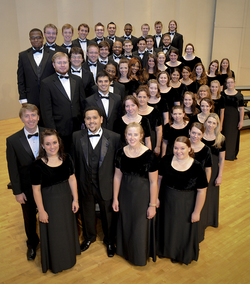 The SFA A Cappella Choir is one of two university choirs selected to perform at the upcoming Texas Music Educators Association Convention in San Antonio. The choir will present a preview concert in Nacogdoches at 7:30 p.m. Monday, Feb. 7, in Cole Concert Hall.

As a preview to its performance at the 2011 Texas Music Educators Association Convention, the A Cappella Choir of Stephen F. Austin State University will present a concert at 7:30 p.m. Monday, Feb. 7, in Cole Concert Hall on the SFA campus.

The 50-member choir is one of only two university choirs chosen to perform at the annual convention open to over 10,000 Texas music educators, explained Dr. Tim King, SFA director of choral activities and of the A Cappella Choir.

Da'On Hinton, graduate student from Dallas who is also the choir's president, said the entire choir is excited about the opportunity. "It is not every day that a choir can perform for an audience filled with music educators, administrators and students who share a true love for our art and will really listen to and appreciate the wonderful music we've worked so hard to prepare."

Monday's performance will give East Texans an opportunity to hear the same program the choir will present in the Henry B. Gonzalez Convention Center in San Antonio at 8 p.m. Friday, Feb. 11.

The program consists of a total of eight works. At the heart of the program are Krzystof Penderecki's "Agnus Dei," Ildebrando Pizzetti's "Sanctus" from "Messe de Requiem," and Veljo Tormis' "Raua Needmine.

The "Agnus Dei" is a part of Penderecki's larger, most well-known work, "Polish Requiem," which took him two decades to complete and is dedicated to his country's suffering. The "Agnus Dei" was written in 1981 in response to the death of Cardinal Wyszynski.

Pizetti composed his "Messe di Requiem" in 1922 in memory of his wife. Its "Sanctus" is "a joyful expression of the 'Holy, Holy, Holy' text, written for three separate choirs," said King.

The 1972 "Raua Needmine (Curse Upon Iron)" by Estonian composer Veljo Tormis was banned by the Soviet government for its denouncement of war. Vocal soloists are tenor Joshua Dennis, graduate student from McKinney; and baritone Casey Jones Parrish, Livingston senior. Jake Taylor, graduate choral conducting student from Livingston, will be featured on the shaman drum.

The Nacogdoches concert is a joint presentation of the SFA College of Fine Arts and School of Music. It replaces the choir's previously scheduled Feb. 24 concert. Tickets are $5 for adults, $4 for seniors and $2 for students. For tickets or more information, please go to www.finearts.sfasu.edu or call (936) 468-6407 or (888) 240-ARTS.