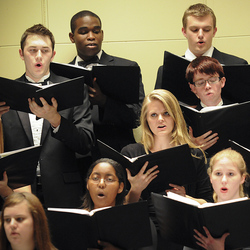 Members of Stephen F. Austin State University's Choral Union and Women's Choir will be singing Ralph Vaughan Williams' "Dona nobis pacem" at Avery Fisher Hall of Lincoln Center in March 2012 as part of a large choir organized by MidAmerica Productions. Community members are welcome to participate in the 5-day trip. Pictured above are members of the Choral Union during a recent concert.

The Choral Union and Women's Choir, both directed by SFA Associate Director of Choirs David Howard, will be a part of a group performance of Ralph Vaughan Williams' "Dona nobis pacem" under the direction of Dr. Sean Vogt, associate professor of music at Mount Marty College in South Dakota.

"The choirs received this invitation both because of the quality of musicianship demonstrated by the performers-a clear reflection of their exceptional director-and because of an initial recommendation given by other music colleagues who recognize that the musical quality of these ensembles is deserving of MidAmerica Production's attention," said Dennis J. Loy, conductor-in-residence for the production company.

"This is an incredible opportunity for our students," said Howard. "It will be a life-changing experience for them to sing this kind of work with a world-class orchestra and singers from throughout the country-and in one of the greatest concert halls in the world, the home of the New York Philharmonic!"

"Another great thing about this invitation is that anyone from the community can participate in the 5-day trip," Howard continued. "Non-students can simply tag along, or, if they are interested in singing with us, they can talk to me about that possibility."

Total cost for each participant is approximately $1,700 and includes roundtrip airfare via Houston Intercontinental; ground transportation to and from New York City airport and to and from rehearsals and the concert; accommodations at the four-star Grand Hyatt Hotel in mid-town Manhattan; post-concert cruise and dinner in New York harbor; admission to the Empire State Building observation deck; a gift coupon redeemable at New York City's Macy's and more.

The first deposit of $300 is due April 29, with remaining payments spread out over the next eight months. Participants can be added to the list even after April 29, but Howard said he'd like to get a sense of how large the group will be as soon as possible.

"Additionally, if there are businesses or community members who would like to lower the students' cost, we will gladly accept donations," Howard said. "The more affordable we can make this opportunity, the larger the number of students there will be who can take advantage of it."

Anyone interested in participating in the trip or donating towards it can e-mail Howard at howardd@sfasu.edu or call him at (936) 468-1148.