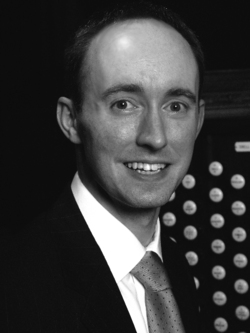 NACOGDOCHES, TEXAS - The Stephen F. Austin State University College of Fine Arts and School of Music will introduce one of its newest faculty members, Jeremy Bruns, in a faculty organ recital at 7:30 p.m. Monday, Sept. 19, at Christ Episcopal Church in Nacogdoches.

In addition to works by Dieterich Buxtehude, J.S. Bach, Josef Rheinberger, W.A. Mozart and George Shearing, the program includes "Annum per annum" by Estonian composer Arvo Pärt, who is known for his personal, minimalistic style, and "Sonata I in F minor, Op. 65" by Felix Mendelssohn.

Bruns will also play Noel Rawsthorne's "Hornpipe Humoresque (A Nautical Extravaganza for Organ)," which Bruns called "an amusing set of variations on the familiar Sailor's Hornpipe in the style of (and with apologies to) Bach, Vivaldi, Arne and Widor."

Bruns, who serves as an SFA adjunct faculty member, is also the organist and director of music at St. Cyprians' Episcopal Church in Lufkin.

As a recitalist, Bruns has performed in venues throughout the United States and England, including St. Paul's Cathedral and Westminster Abbey in London, Canterbury Cathedral, Washington National Cathedral, St. James' Cathedral in Toronto and Grace Cathedral in San Francisco.

He has worked as a church musician in Massachusetts and New York, including as associate organist at Saint Thomas Church Fifth Avenue in Manhattan. He has served as an executive committee member of the Boston Chapter of the American Guild of Organists and was a guest conductor for the Episcopal Diocese of Massachusetts.

Bruns received his Master of Music in performance and literature from the Eastman School of Music and was a prizewinner in the 2003 Dallas International Organ Competition and the 1993 International J.S. Bach Competition held at the Kennedy Center in Washington, D.C.