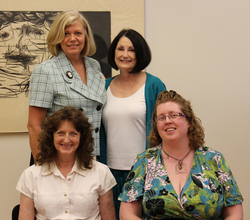 NACOGDOCHES, TEXAS - Members of the SFA Friends of the Visual Arts, a community organization devoted to supporting the Stephen F. Austin State University School of Art, have elected their officers for the 2011-2012 academic year.

Michelle Smith will serve as this year's president. Smith has been involved with the friends organization for one year, volunteering with the First Friday Film Series and working on the membership/public relations committee. She is employed as the director of community outreach for Nacogdoches Medical Center,

Smith succeeds Sandy Massey, who has served in the position for the past year and been a member of the Friends of the Visual Arts Board since 2007, volunteering with the group's events, exhibitions presented at the SFA galleries and the School of Art's Art Day.

Stephanie Stephens, who has been a member of the organization since returning to her native Nacogdoches in 2002, will serve as vice president. In addition to maintaining her law practice and working with the Friends of the Visual Arts, Stephens is involved with Nacogdoches Junior Forum, Fredonia Rotary and Heritage Heralds.

Dr. Hope (Bess) Wilson was re-elected as board secretary, having served in the position during the 2010-2011 school year and working with the Art Day and scholarship committees. Wilson is an assistant professor of elementary education at SFA and the assistant service unit manager for the Nacogdoches area Girl Scouts.

Linda Mock, who has served as the board's treasurer since 2000, will again hold that office while continuing to work with the "12 x 12," scholarship and Art Day committees. From 2000 to 2008, Mock worked as a volunteer for the SFA director of galleries and then took a part-time position as the business manager for the SFA galleries in 2009.

The SFA Friends of the Visual Arts serves as a liaison between the community and the SFA School of Art and its galleries; encourages gifts, endowments and financial aid to the School of Art; sponsors programs designed to add to the cultural life of East Texas; and works with artists and art organizations to foster and promote the visual arts.