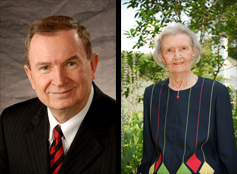 Dr. Jim Towns (left), professor of communication, and Tyler philantropist Ina Brundrett (right) will be honored as outstanding donors at the 23rd annual SFA Gala on Saturday, Dec. 10, in the Grand Ballroom of the Baker Pattillo Student Center.

Outstanding donors to be honored during the 23rd annual Stephen F. Austin State University Gala include a longtime faculty member, a friend of the SFA Gardens and the local newspaper.

The support of Dr. Jim Towns, professor of communication, and Tyler philanthropist Ina Brundrett will be recognized, along with scholarships made possible by The Daily Sentinel, at the Gala to be held Saturday, Dec. 10, in the Grand Ballroom of the Baker Pattillo Student Center.

An endowed professorship recently established at SFA honors Towns, longtime professor in the communication studies program. The professorship was created to recognize and reward SFA faculty members who are excellent teachers and also act as mentors for students outside the classroom. Faculty mentoring and reverse mentoring are among Towns' research interests, and he has successfully mentored countless students throughout his distinguished 46-year career at SFA.

"Looking back on my career at SFA, I think in many cases the time I have spent with students outside the classroom has been just as important, if not more so, than the time I spent teaching them in class," Towns said.

"I really wanted to endow a professorship that would encourage those kinds of relationships, which I think have benefitted me as much as my students over the years."

Towns was named SFA Regents Professor for the 1994-95 academic year and received the 1996 Distinguished Professor Award from the SFA Alumni Association. He also earned the Distinguished Alumni Award from Hardin Simmons University in 1999 and the SFA Applied Arts and Sciences Teaching Excellence Award in 2002.

Towns earned his bachelor's degree from Hardin Simmons University in 1965 and his master's and doctoral degrees from Southern Illinois University in 1966 and 1970. He taught at SFA as an instructor for two years in the 1960s, rejoining the faculty as a full-time professor in 1970.

A proposed Conservation Education Center at SFA's Pineywoods Native Plant Center will include an open-air pavilion named in honor of Brundrett, a member of both the SFA Gardens and Native Plant Center boards of advisers. The pavilion will allow SFA to accommodate visitors to the SFA Gardens year-round, rain or shine. The LEED (Leadership in Energy and Environmental Design) certified facility will embody the environmental and conservation lessons taught through the Gardens' various educational programs.

A member of three garden clubs, Brundrett is a former president of the Texas Garden Clubs and a Certified Master Gardener. The backyard of her Tyler home has been declared a wildlife habitat by Texas Parks and Wildlife and the National Wildlife Federation.

Brundrett credits her late parents for instilling in her a passion for both gardening and higher education. She hopes her recent gift will help do the same for the thousands of children who visit the SFA Gardens each year.

"I love the way the staff works with visitors, and the SFA Gardens are a wonderful outdoor classroom, not only for school children but for the entire community," Brundrett said.

"I had an idea that this pavilion would help make that experience even better and perhaps make a difference in some young people's lives."

The Daily Sentinel is a longtime supporter of the NOBLE scholarship program, a project of the Nacogdoches County Chamber of Commerce that challenges all county public school students to complete the more rigorous "recommended" or "distinguished" program of study during high school.

Each year, the newspaper helps fund $1,000 scholarships for 20 high school seniors from across Nacogdoches County to attend SFA. In its 18-year history, the NOBLE scholarship program has given away more than a quarter of a million dollars to further the education of area high school graduates. In addition, the newspaper is a strong supporter of SFA performing arts and athletic programs.

The Daily Sentinel originally was established by Robert W. Haltom and W.H. Harris as The Daily Phone on July 24, 1899, assuming its current name just six months later. The newspaper has undergone several ownership changes and currently is owned by Southern Newspapers, a family-owned chain headquartered in Houston.

Rayanne Schmid, editor and publisher of The Daily Sentinel, said the newspaper is committed to continuing its role as an integral part of Nacogdoches, serving the community and taking an active role in the causes that benefit area residents.

"NOBLE scholarships allow us to reach out to Nacogdoches County high school students and help them get their first taste of university life," she said. "Our hope is that those first few credit hours will lead to a hunger for knowledge and the desire to continue on the higher education path.

"In addition, we appreciate being able to keep those education dollars within our own county and expand their impact."

The Gala cocktail reception will begin at 6 p.m., followed by a candlelight dinner at 7 p.m. Entertainment will be provided by Blind Date of Austin, featuring a versatile repertoire of dance, rock, jazz, country and hip hop.

Tickets are $165 for orchestra seating and $115 for ballroom seating. Proceeds from the Gala help build a permanent endowment created by the SFA Foundation to honor faculty achievement.