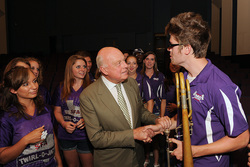 Deputy Lord Lieutenant Roger Bramble, left, principal patron of the London New Year's Day Parade & Festival and representative of Queen Elizabeth II, greets Bryce Biffle of Garland, a junior in the Lumberjack Marching Band, following Wednesday's official reading of an invitation for the band to perform at the event in 2013. Between 200 and 250 SFA band members and alumni are expected to participate in the event, which is broadcast to a television audience of 280 million.

Deputy Lord Lieutenant Roger Bramble, representing Queen Elizabeth II, traveled to SFA from London to present the official invitation to the band in person. Each fall, the Lieutenancy decides upon a select number of groups that it wishes to visit in the United States in connection with London's New Year's Day Parade. Bramble was accompanied to SFA by Robert Bone, executive director of the parade.

"You came to our attention because everybody has told us that you are one of the finest marching bands in the country," Bramble said during his visit, which was punctuated with lively musical performances and enthusiastic applause from band members.

Accepting the invitation on behalf of the Lumberjack Marching Band was Dr. David W. Campo, director.

"I am so thrilled we'll be able to offer this opportunity for our students to travel abroad and see London," he said. "It is also very exciting to bring some international recognition to the university, which has been so supportive of the band program for so many years."

Campo said he expects between 200 and 250 members of the marching band to participate in the 27th annual parade, which is watched by more than 600,000 spectators and televised to 280 million people around the world. More than 20 different countries will be represented in the parade and associated concert performances.

"This is beyond awesome," said Jordan Vaught, an SFA junior who plays tuba in the band. "To be selected to perform, televised, in front of millions of people across the ocean is simply phenomenal. We are so excited to have this opportunity!"

Megan Massarello, a freshman trombone player, echoed the sentiment.
"How exciting to come to SFA as a freshman and hear that the Lumberjack Marching Band has been invited to perform in London in the New Year's Day Parade! I am extremely excited to get the chance to go to England, and I am looking forward to it. "

While on campus Wednesday, Bramble and Bone met with representatives of the university and the College of Fine Arts, as well as band students and faculty members.

"We know that international travel and the experiences it offers to students can be a unique and valuable element of education," said Dr. Richard Berry, SFA provost and vice president for academic affairs. "I am delighted that this opportunity has developed, and I look forward to having the Lumberjack Marching Band represent SFA and the United States amidst the pageantry of a London New Year's parade."